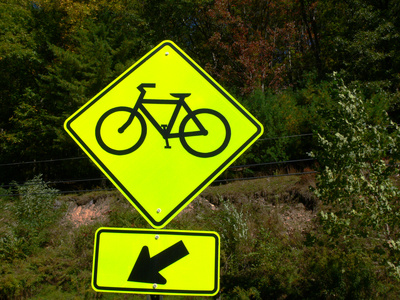 Again, I was riding my bike to work today.  A part of my route gives me two options.  Neither option has bike lanes. The first option is to ride south on Pennsylvania Street from 16th street to Ohio.  Pennsylvania is a one way south with four lanes and is a busy artery into the city from the north side. The other route is Delaware Street.  Delaware Street, south of 16th street is also a four lane street, but it is a one way north.  It had 8 foot wide sidewalks and in the morning is not really heavily travelled.  I choose to take the Delaware Street route because it is less congested and I think is safer than the Pennsylvania Street route.   I have noticed a few things about this decision that I would like to share.  The first is that when cars come to Delaware Street, whether they are coming out of a parking lot, a street or an alley, the driver inevitably looks only to the south (the direction from which car traffic is traveling).  At first I was kinds put off by this.  Then it occurred to me that this was only natural because that is the only direction the driver expects a hazard my come from.  Given this fact, whenever I come to an intersection or any outlet on to Delaware Street, I always yield to the car.  I never pass in front of them because I know they probably with not look for me.  Those who do look, always look startled to see me waiting for them to pass. This surprise always gives way to a thankful smile as I waive them on. It is a little curtsey that has saved my butter on many occasions.

When I ride south on Delaware, I ride on the sidewalk when traffic is so close that we may pass.  If I ride on the road the drivers do not seem to know what to expect from me.  I think they think that if I am crazy enough to ride south on a one way north street, I may be capable of doing anything.  They give me weird looks and sometimes the looks are hostile.  I think that to be safe, I want the driver to believe that my actions are going to be predictable.  To this end, I ride on the sidewalk when cars are coming at me.  If there are people on the sidewalk, I slow down, give them the right of way at all times and make sure they are aware I am there with an audible signal.  Pedestrians appreciate knowing what is going to happen the same as a driver does.  If the sidewalks were not so wide on Delaware Street, I may have to choose another route, but they are wide, and with a little courtesy, my rides are accident free.