I’ve been reading a little history about a group of people who used propaganda, fear tactics and outright lies to outlaw their country’s constitutionally guaranteed rights and take over the government.  I am shaken because I see a group of Americans trying to do the same thing now. The group uses propaganda to convince Americans that one of their constitutional rights is at the root of an unpatriotic assault on our country’s existence. You have heard it in newspaper stories and on the internet that the civil justice system needs to be done away with because it is a lottery system to enrich liars and fakers claiming they were injured. This propaganda instills fear of the system in those the system works to protect.  Part of the propaganda are lies told about the system in the way of false jury verdicts based on outrageous facts.  I received one such email the other day about the Stella Awards.  This award, based wholly upon lies, is named after the woman who was burned by scalding coffee at McDonalds.  To learn the truth about the coffee case, watch the movie HOT COFFEE.  To learn the truth about the Stella Awards go to the Urban Legends website. 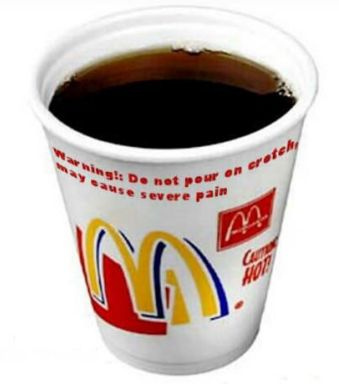 If the civil justice system was really a threat to our economic well being, why use lies and propaganda to attack it?  Why not use the truth?  The reason they use lies and propaganda is because they are banking on the fact that good people will keep their mouths shut and not stand up to those who want to rob us of our constitutional rights.  Their motivation is not perfectly clear because it is a shadowy group, but it does seem clear that if the little guy is locked out of the Court House, if the little guy has not equal footing with mega corporations such as insurance companies, then these corporations are free to do whatever they please at the expense of the little guy.

Your Constitutional right under assault is The Sixth Amendment:

RIGHT TO TRIAL BY IMPARTIAL JURY

The group in history who used propaganda, fear tactics and lies to control their government was the German National Socialist Party which took over the German Government in 1933. Within a month of a democratic election, the Reichschtag burned and the German people were told it was a communist plot, that they must temporarily give up their constitutional rights for their own protection. The German people believed the lies and gave up their freedoms.  They thought it was temporary.  They thought it would protect them, not cause them harm. A week later Hindenberg signed the document on behalf of the German people giving absolute power to one man. The next 12 years proved the German people and the world wrong.  Giving up rights out of fear is dangerous.  I think it was Jefferson who said that those who give up their rights to obtain protection deserve neither.

Never let lies be used to create fear to allow us to give up our rights. Stand up when you hear or see them and tell the purveyors of these lies that we will not allow them to take our rights through lies and fear.

I just received an email asking me about the inter relationship between Social Security Disability and Social Security Old Age and Retirement benefits.  The question was essentially as I am already receiving Old Age Retirement benefits, I assume I am not entitled to Disability benefits.   To answer this question it is important to know a little about each of these benefits.  Each is supposed to have its own fund of money.  Thus if one is on disability the payment is from the Disability fund.  If one is drawing Old Age retirement benefits those benefits come from that fund.  Each fund has its own administrative procedures for processing and paying claims.

If you have a question about these issues, please give me a call to talk through your questions.

Wrongful death is the causing the death of another either through intentional acts or through negligent acts.  If the acts are intentional there may be both a criminal case (for Murder) and a civil case (for damages arising from the wrongful death).  For an example think of the OJ Simpson case.  In that case OJ Simpson was prosecuted for murder in the death of his wife Nicole Simpson and Ronald Goldberg.  He was found not guilty of those charges in the criminal case.  Then the family of Ron Goldberg sued OJ Simpson in a civil case for wrongful death.  They won and received a judgment against Mr. Simpson.  That judgment remains unpaid because Mr. Simpson claimed he did not have the money to pay it.  You may be wondering why Mr. Simpson’s insurance company did not pay the judgment.  The reason is that insurance policies exclude coverage for intentional acts, and as the families proved that Mr. Simpson intentionally caused the wrongful death of Mr. Goldberg, the insurance company was not required to pay.

As we stated earlier, Wrongful death can also be caused by negligent acts.  Negligent acts are acts that are not intentional, but result from a person not being careful.  Examples of negligent acts include drunk driving, running a stop sign, driving a semi tractor-trailer without performing proper maintenance, not following the safety rules on a construction site.  There are many, many example of negligent behavior.   The wrongful death claim is controlled by the Indiana Wrongful Death Statute (IC 34-23-1-1, IC 34-1-1-2, and IC 34-23-2-1).  Potential damages arising out of wrongful death include the loss of wages of the deceased, medical bills to treat the deceased’s last illness, burial and funeral expense, loss of love and affection and attorneys fees.     The persons  to who these damages flow are the spouse and children of the deceased (if the children are 18 or younger or full time students up to age 23) and any person who is dependent upon the deceased.

There are a great many other legal variables at work in any claim where a person dies as the result of another’s negligence.  If you are struggling with the wrongful death of a loved one, or know someone who is and you have questions, or need help, please call.  We charge no fee for the initial consultation and we will come to your home or any location you feel is best.

Yes, a child who is disabled may file their claim for benefits based on their parents earnings history in certain circumstances.  I know you are asking yourself, “why would my child benefit from filing on my earnings history, as opposed to his own.  The answer lies in the difference between Title II Disability (SSDI) and Title XVI Supplemental Security Income (SSI).  SSDI pays more per month.  SSDI entitles the recipient to Medicare.  SSDI has fewer restrictions.  SSI is essentially welfare and therefore has many restrictions including set offs for support received from other sources.  SSI pays less per month.  As an SSI recipient, who has not worked, it is likely that you will not be eligible for Medicare.  So, now you know that if you can, you want to apply under your parents earnings history to be eligible for SSDI.  What now?

First, the rules which cover eligibility for a child on the parent’s earnings history are found in 20 CFR parts 400-499.  More specifically the rules are found at 20 CFR Section 404.350.  Generally to be eligible under these provisions you must be the child of a covered individual who has either died or is currently receiving SSDI or retirement benefits.  You must be either under 18, or you are 18 or older and your disability began before you turned 22 or you are 18 or older and qualify as a full time student under section404.367.  Of course you also have to apply under the parents social security number.  Other rules do apply, but a complete description in the blog would take several pages.

If you think you qualify, but are not sure and have questions, please feel free to contact us.

A week ago I penned a blog entry about texting and driving.  We see it all the time in our practice causing all kinds of serious personal injuries to our clients.  I wrote that teens seem to be more aware about the dangers of drunk driving accidents and are using good judgment in using cabs or designated drivers.  I also talked about the dangers texting and how it causes the driver to have the same attentive cognition as a drunk driver.  Unfortunately my worries were confirmed by a study released by the Governors Highway Safety Association.  Apparently in the first half of 2012 traffic deaths among drivers ages 16 and 17 increased sharply in Indiana.  The statistic is frightening, in January 2011 we lost 3 souls, in 2012 we lost 16 children of Hoosier families.  The report  places blame at the altar of the distracted driver.  This includes texting drivers.  We can’t blame this increase on texting alone, but it is a significant contributing factor.  Think about it, we take an inexperienced driver operating a 2000 pound torpedo and then we mix in a cell phone for texting.  It is a recipe for disaster.

The government is doing what it can to address this health issue, but as I stated before, we cannot rely on the government to fully address this problem.  Parents, talk to your children.  Show them these statistics.  Teachers, talk to your students, show them these statistics. In order to reduce or eliminate these problems, it will take a village to educate our children.

Let it start with me and the example I set.  I pledge not to text and drive.  I pledge to speak with my children.

I received a call today from a potential client.  She said she had been on our website and saw that we handled cases involving automobile accidents, drunk driving accidents, semi tractor-trailer accidents , construction accidents and the like.  She also said she knew that we worked frequently with people who have serious personal injury including brain injury, broken bones, spinal cord injuries, paralysis and disability.  However she did not know whether we handled civil suits.  This made me think that our website needs a little clarification.

There are two basics types of legal proceeding,  Criminal and Civil.  Criminal proceedings (aka criminal cases, criminal suits, criminal prosecutions) involve the government charging an individual with a crime.  Civil proceedings (civil suits, civil claims, civil lawsuits, or civil administrative matters) involve all other types of legal proceedings.  All claims involving serious personal injury are civil suits.  This is all we do.  Basically we represent anyone who has been seriously injured and the facts of their case establish that their injuries were caused by the negligence of another person.  We carefully screen each case to make sure that the facts of any claim support the claim for serious injury. We do not waste our time on frivolous claims.

If you have been injured by the negligence of another person, please call or email us, we want to help.