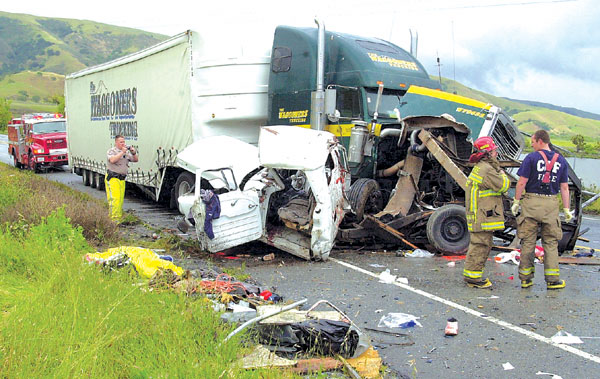 A group of young people were on their way to a concert in another state.  The young people were in 3-4 separate cars, and they were in a kind of caravan.  In the rear of the line of cars was a young man, about 27 years old.  He worked for a major retailer and his talents were just being recognized.  You see he had a gift for using the computer and an eye for how to use that gift to make his employer more efficient and profitable.  He was driving his girlfriends van.  The young woman was  skilled at her marketing job, and the future looked so bright for these two.  They were exactly what Hoosiers take pride in, they were smart, hard working, and committed. They were looking forward to the concert and spending time with their friends. They were looking forward to a life promised by the American Dream.

They were in a another state.  They were on a major highway.  They realized traffic was slowing in front of them and they braked.  The problem up front was a collision.  They brought their van to a stop behind their friends at the rear of a long line of cars who were also stopped.  Unknown to these young lovers, a semi tractor-trailer was barreling down upon them at highway speed.  The driver, was distracted, looking either at a phone or other media delivery device.  The driver did not notice that traffic was stopped.  The driver realized too late that traffic stopped.  The semi tractor-trailer smashed into the van.  We want to think that the young couple suffered their wrongful death instantly.  We just don’t know.  The van exploded into flames.  The semi tractor-trailer continued its carnage, blasting into other cars causing serious personal injury to many others including serious burns, broken bones and brain injury.

All this carnage wrought because one man could not keep his eyes on the road and away from his phone.  A mother is left to grieve.  She endures the weight of this loss.  She hears herself saying to other parents, I hope you never know this pain, and cannot fathom that this is her life, her loss, her burden for the rest of her life.